The Pineapple Story and Its History 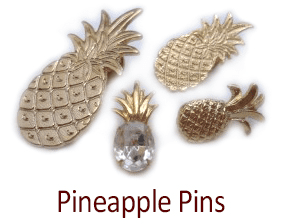 The Pineapple story begins with Christopher Columbus, who brought the pineapple, which originated in South America, back to Europe. The pineapple is thought of as an obtained prize from the New World.

Sweets, like sugar and fruit, were not considered as a commonly imported commodity. Therefore, the pineapple with its intense sweetness, became so desirable and widely sought after. Soon, thereafter, pineapples were highlighted on banquets and considered to be the height of extravagance in Europe. After about two centuries, Europeans perfected the hothouse method of growing the fruit.

In later centuries, the Story of the Pineapple remained in the early American colonies when pineapples were used as symbols of hospitality and friendship. Legend tells about the sea captains of New England sailing to and from the Caribbean Islands with exotic fruits and spices. 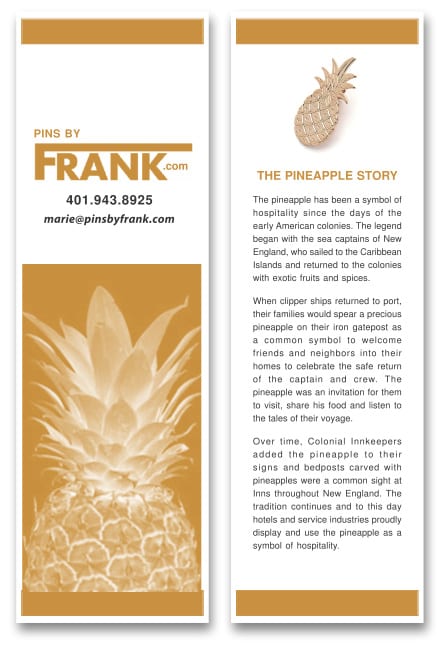 Then, as clipper ships returned to port, their families would spear a precious pineapple on their iron gatepost as a common symbol to welcome friends and neighbors into their homes. This symbolized celebrations and safe returns. Thus, the pineapple served as an invitation to visit, share food, and listen to tales about recent voyages.

In early settlements, pineapples were traditionally given as a gift of friendship. Over time, colonial Innkeepers added the pineapple to their signs. Also, pineapples carved into bedposts were a common sight at Inns throughout New England. In modern times, hotels and service industries continue to proudly display and use the pineapple as a symbol of hospitality.

Today, the pineapple pin is wore as a symbol of hospitality to convey the significance of its decade rich history.

The Pineapple Story is available as a book mark that the pineapple pin can be affixed to.  Bookmarks can be purchased in any quantity at $.70 each plus S&H.

Feel free to send us an email at [email protected] or fill out the quick form below to get the conversation started or request a free quote.

If you are ready to order
just Click Here